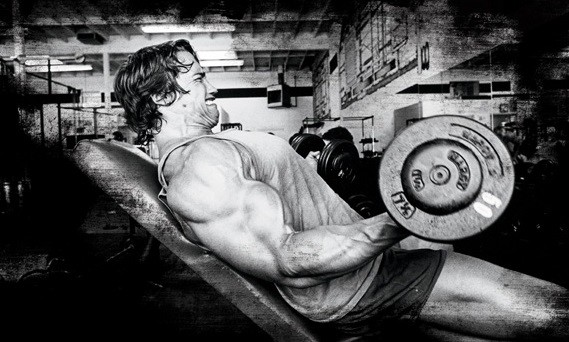 The primary function of the biceps is flexion of the elbow bringing the hand towards the arm and rotation (supination) of the forearm.

A lot of people don’t realise that when you twist your wrist from palms facing down (pronation) to palms facing up (supination) that the biceps muscles are controlling this movement. Give it a try, with your right upper arm perpendicular with the floor, lift your forearm out with palm facing down.

Squeeze your right bicep with your left hand. Now rotate your right hand to bring your palm facing up. You can feel the bicep working with just that small rotating movement.

In this post I’m going to show you how to use this little twisting movement to help build those biceps into intimidating guns!

It’s also important to know that the biceps don’t work alone. There are two other supporting muscles. One is called the Brachialis which is located under the biceps, and acts like a second bicep. This muscle has the potential to become just as big as the biceps, but is often underdeveloped.

The other is the brachioradialis which is really more part of the forearm but plays a supporting role in biceps movements.

To get the most out of your Biceps Training and to start adding inches to your arms we’re going to look at including good exercises for both flexion and supination, that will target the short and long head of the biceps and supporting muscles.

You’re also going to learn how to perform these exercises with correct form to avoid injury and maximise growth.

Exercises to be Performed

This is an isolation exercise that will target the outside (long head) of the biceps. Because the elbows will be behind the torso during this exercise it will dramatically alter how you recruit your biceps, giving a great stretch near the shoulder with more tension being placed on the long head.

You must start this exercise with light weights because of the extreme stretch, to avoid inflammation or injury to the tendon. Of course, if you feel pain in the front of your shoulder stop immediately.

With dumbbells in each hand, lie on an incline bench and allow both arms to hang freely by your sides. Keep your elbows close to your body. This will be the starting position. Now, while keeping your upper arms stationary, bring your arm up rotating your palms up as you lift the dumbbell.

At the top of the movement when your hands are shoulder level fully rotate your hand outwards (supinate), squeezing the biceps for a second before slowing lowering the weight back down.

Fully twisting out at the top of the dumbbell curl creates a stronger peak contraction – forces the bicep to contract harder recruiting more fibres. Implementing this twist should be a staple with all bicep curl exercises.

Be sure to lower the dumbbell in a controlled manner concentrating on the eccentric contraction.

This is a great isolation exercise that will place most of the load on the inside (short head) of the biceps because the elbows are out in front of the torso. Preacher curls also target the brachialis more than classic curls do.

Sit down on a preach bench or machine and perform using bar or dumbbells with a supinated grip (thumbs pointing outside / palms up). If you’re using a bar, make sure that your grip is around shoulder width apart.

Rest your upper arms/back of elbows in the preacher pad. Raise the weight using your biceps, and avoid relaxing the biceps at the top of the movement. Slowly lower the weight to the starting position without ever fully straightening your arms at the bottom of the movement. Keep constant tension on the muscle throughout the entire lift.

Sit down on a flat bench with one dumbbell in front of you on the floor. Reach down and grasp the dumbbell with an underhand grip. Place the back of your elbow/upper arm against your inner thigh. Curl the dumbbell up as high as possible while concentrating on just contracting the biceps.

Don’t allow your elbow to lift away from your inside leg. Hold the dumbbell at the top contacted position for a second then lower back down in a slow and controlled motion.

This exercise focuses on the brachialis and brachioradialis, and less on the biceps. You will be doing this exercise with a neutral grip (palms facing each other) and will find that you’re stronger compared to curls with a supinated grip. Another advantage of hammer curls is great strengthening of the forearms that will help with other exercises.

Perform this exercise standing up. Take a dumbbell in each hand with a neutral grip and hold at arms length. Your elbows should remain close to your body and upper arms should remain static throughout the lift. Avoid using your shoulders or swinging to get the weight up. Raise the dumbbell up keeping thumbs facing up and move your elbows back slightly. Hold the dumbbell at the top for a brief pause then slowly lower the weight.

This workout is 10 sets total for biceps, which may seem like quite a lot of volume for a small muscle group.

To make sure that you maintain enough energy and intensity to get through this workout do NOT got to complete muscular failure on every set.

No, going to failure is not a requirement for growth.

Train heavy and hard with good form but stop one or two rep before complete failure. Only on your last set of each exercise should you go to the point of complete failure where you’re unable to perform another rep.

The biceps are a small muscle group and recover quickly.

One thorough and intense bicep workout each week is enough for good growth and development.

Bear in mind that the biceps are getting worked with any pulling movements such as on your back training days. So one direct bicep workout and indirect on back days is more than enough to see great gains.

Credit to Bodybuilding.com for exercise images